We have created Bash versions (for Mac and Linux users) and Powershell versions (for Windows users) of all scripts. We tried to make these versions act as similarly as possible , but you will notice some slight differences. For example, Bash scripts end with .sh and Powershell scripts end with .ps1. If the presenter is using a Mac and you’re using a PC, when they type script.sh, you should type script.ps1.

General Usage (and -h for help)

Nearly all of the scripts offer users two main paths: previewing the manipulated video with FFplay or saving directly to a file with FFmpeg. Due to the taxing nature of some of these visualizations, your computer may not be able to preview with FFplay in a completely seamless fashion (prepare for the possibility of laggy playback).

But fear not: you should be able to at least get a sense of how your art will look, and these delays will not carry over into your resulting files.

All scripts also come equipped with built-in help instructions, which can be pulled up with a -h flag.

For example, running the following:

Will spit out these helpful hints:

One of the operating assumptions of FFmpeg Art School is that you’ll want to try out a whole range of possibilities before settling on the look of your final artwork. To help you in this process, you can preview by using the -p flag. For example:

If you’re satisfied with the echoey look of these Retro Dancers, you can re-run the previous command and simply swap the -p for -s to call FFmpeg and tell it to create and save the file.

Note: for Powershell script users, the -p flag first encodes the video to a temporary file and then plays the file with ffplay, so you will not see immediate feedback.

For consistency and ease-of-use, all of the FFmpeg Art School scripts currently transcode input files to Prores HQ 422, wrapped in Quicktime (.mov). But feel free to adapt these to your wants or needs!

MOST IMPORTANT: the -p or -s flags are required, so if you run the scripts without them, nothing will happen!

Many—but not all—of the scripts allow for customization through the use of optional parameters (or positional arguments) passed by the user when executing a script. In almost all cases, we’ve written code that either defaults to pre-set options or makes random selections, but these variables can always be adjusted by the user as needed. And, most importantly, whether options are available for a script or not, they will be described in depth in the help documentation (run the script with a -h flag).

To take one example, the bitplane script, which manipulates the Y, U, and V planes of a video to make colorful creations, defaults to randomly chosen numbers between -1 and 10 for all three variables. But, if after running the script a number of times in preview mode, you’re happy with the look of a particular combination, you can re-run the script in the following way to hard set those numbers: 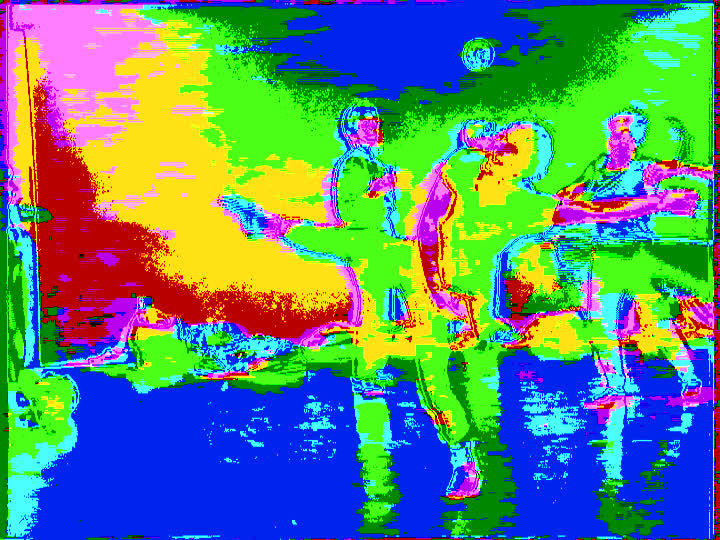 Creates an audio visualization overlay by blending two input files (one video, one audio) and using FFmpeg’s displace and showcqt filters. Essentially, the audio file gets passed through a frequency spectrum generating filter (showcqt) and the video file is forced to conform to the undulating waves of the audio. Sounds crazy, looks like this (Color Bars + Jumpin’ Jack Flash): 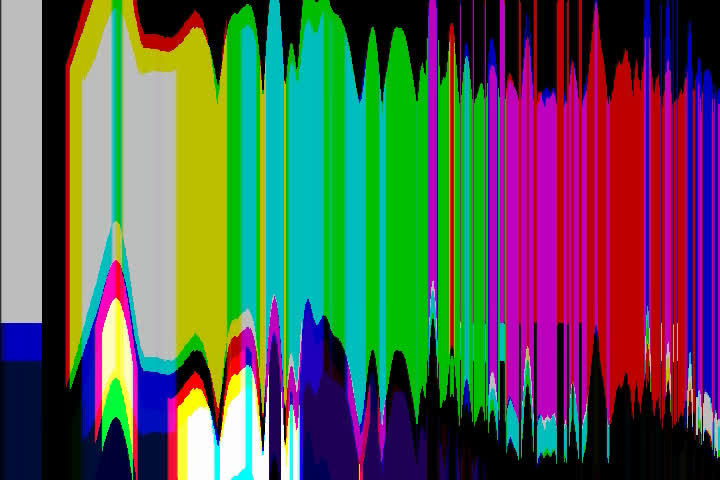 Based on the QCTools bitplane visualization, which “binds” the bit position of the Y, U, and V planes of a video file by using FFmpeg’s lutyuv filter. The script has randomness built into it, and the numerical values—a range between -1 and 10—for the Y, U, and V planes will vary upon successive runs, yielding cool and different results each time you give it a spin. NOTE: -1 will be the equivalent of removing a plane entirely, while 0 is essentially a stand-in for not manipulating a channel at all (so three zeroes will look exactly like the video would without any change at all).

In YUV video, there are two things to keep in mind:

Some additional helpful info from the QCTools documentation: 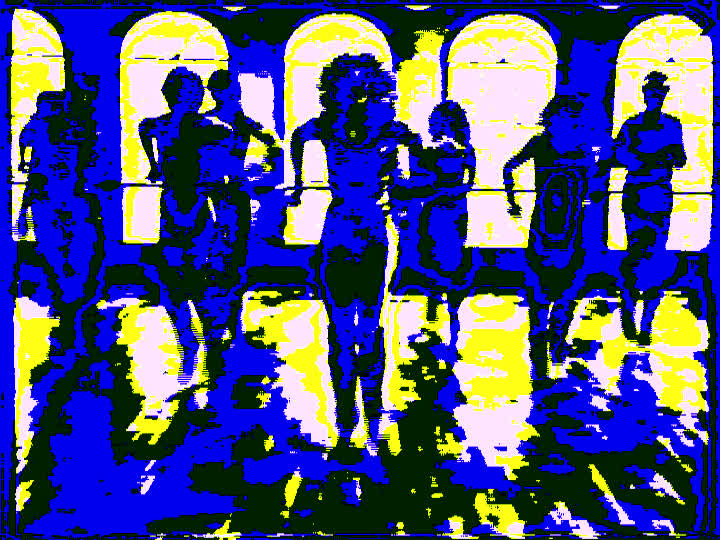 Totally lifted from QCTools, this script manipulates ONLY the Y plane of a video file (with FFmpeg’s lutyuv filter) to create a “sliced” effect in which cropped sections of the source video are presented in numerical order from most significant bit (1) to least (10). Hard to describe, looks like this: 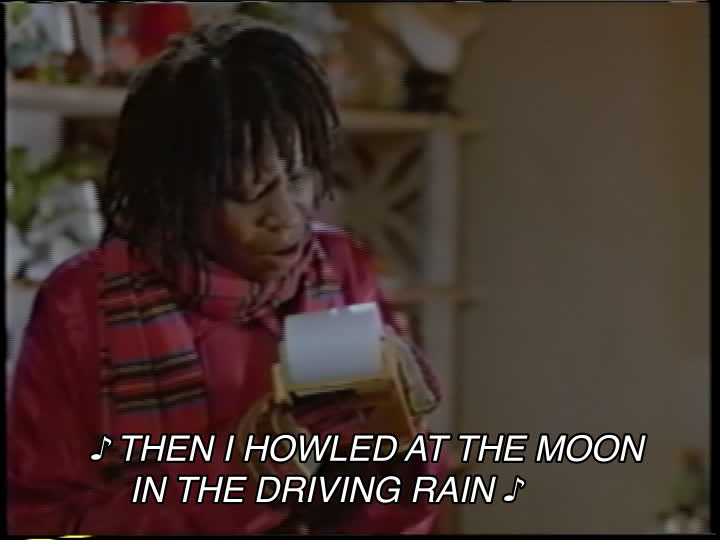 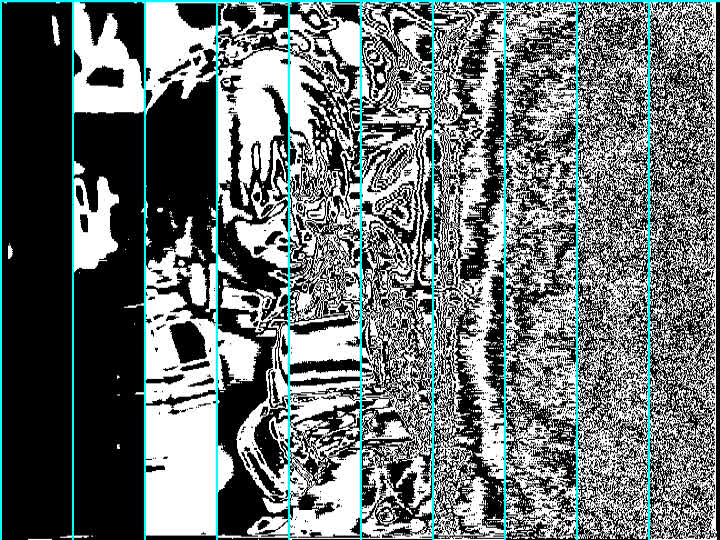 Blends two files together in a variety of ways, using FFmpeg’s blend filter. The first input will serve as the “top” layer, the second the “bottom.” Defaults to addition128, but a number of other options are available (don’t miss out on xor!): 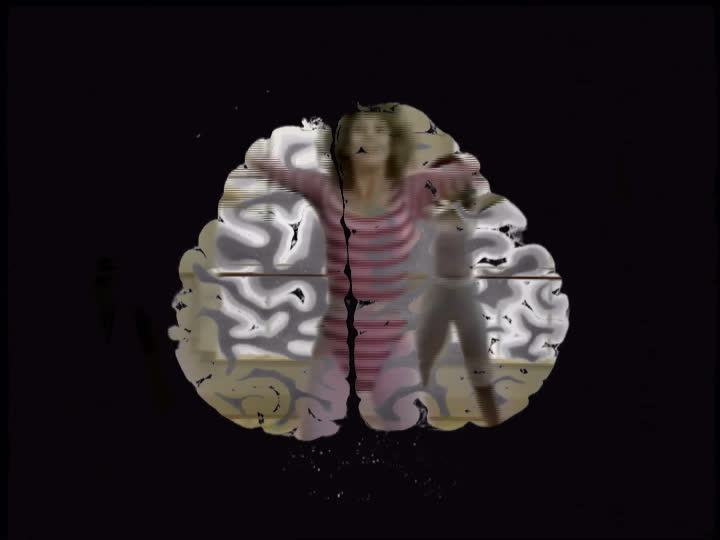 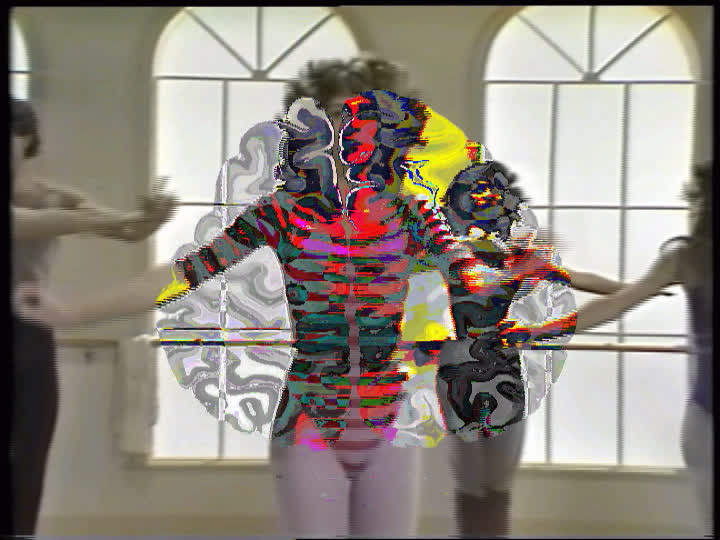 Combines two files using chromakey effects, using FFmpeg’s chromakey filter. Fairly straightforward, but you do have to have at least one file that contains the “green” screen that will be replaced with transparency.

Input 1: the video file that contains the “green screen” or color to be keyed out

Input 2: the video file that will appear behind the keyed video

Input 3 (optional): the color to be keyed. Any hex color code can be entered, as well as the following colors: green, blue, red, purple, orange, and yellow. The default value is green or 00FF00.

Input 4 (optional): the similarity level. Default value is 0.6 The closer to 1 the more will be keyed out. 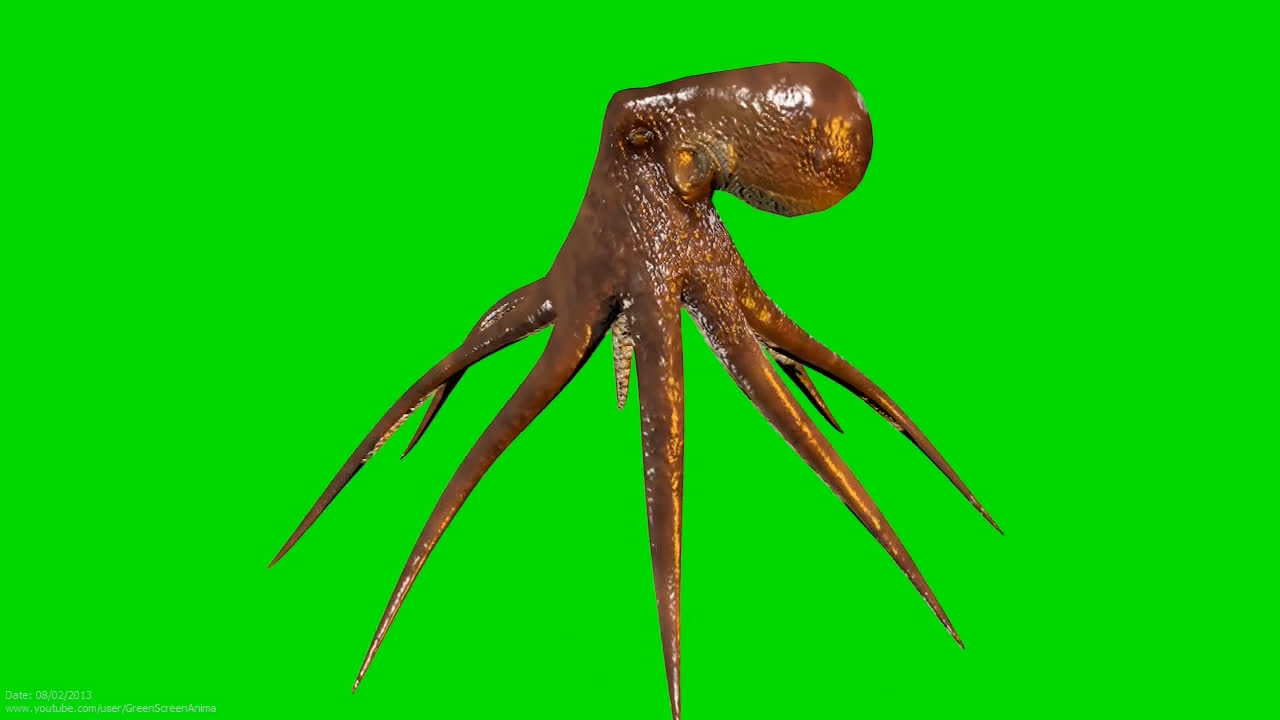 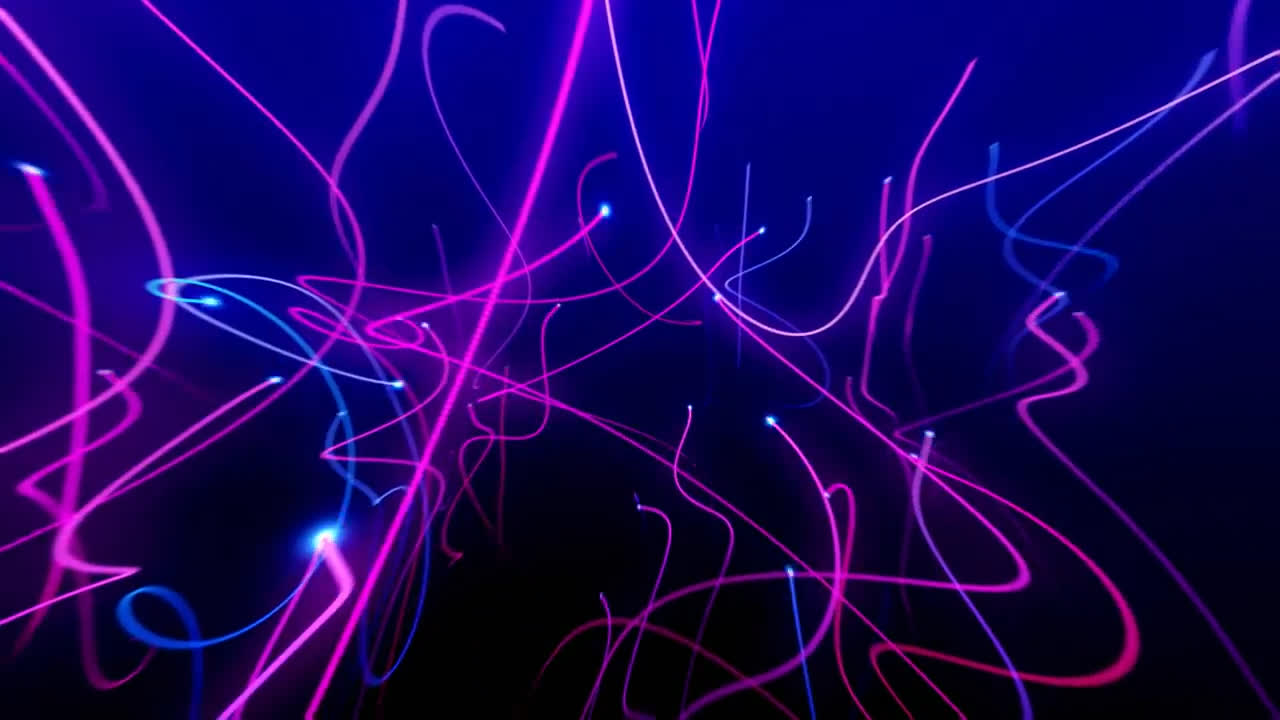 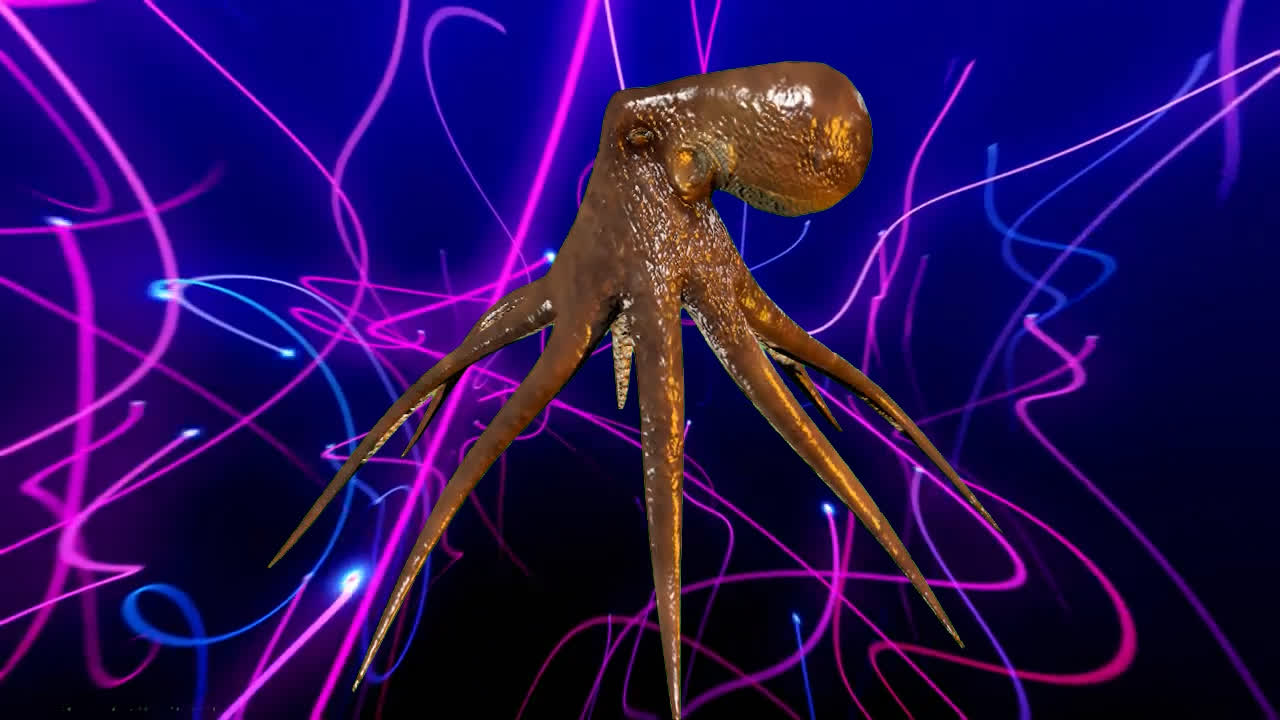 Input 1: the video to be colorized

Shania Twain “That Don’t Impress Me Much” music video 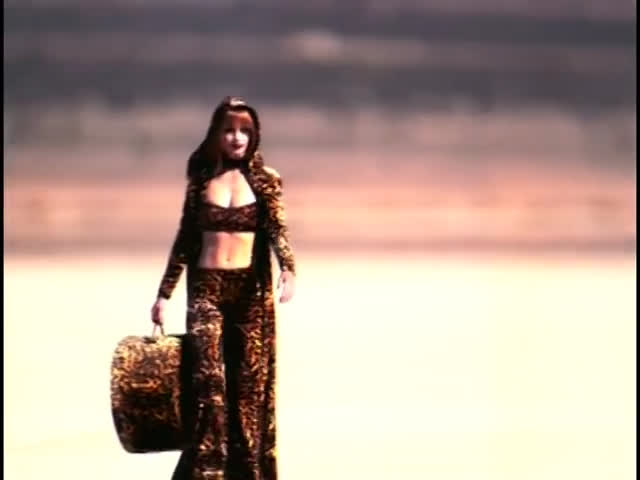 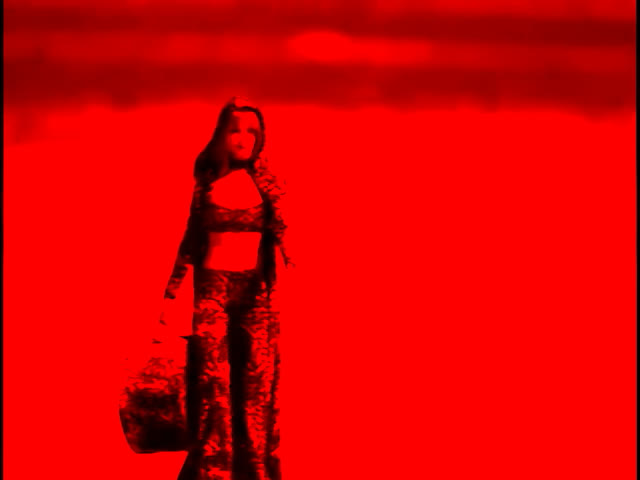 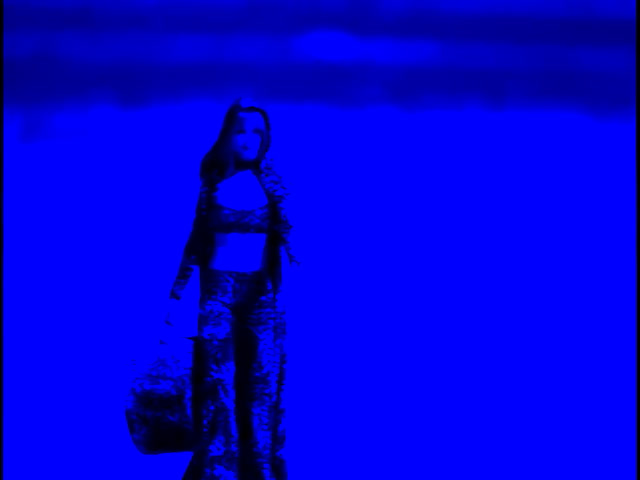 Input 1: the video to be corrupted

Input 3 (optional): keep temporary file (boolean). Default is 0 (false), use 1 to keep the file but it will probably be wonky 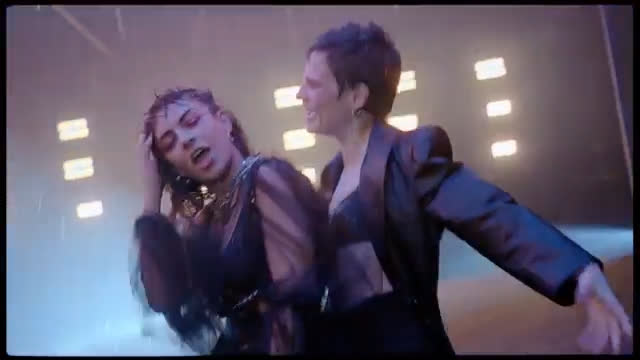 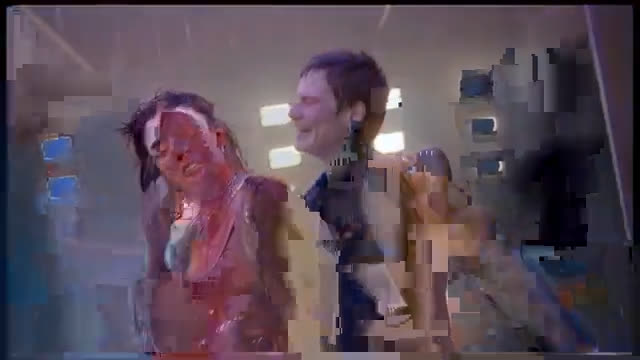 Input 1: the video file to be echoed

Input 3 (optional): the length of trails. 1 is just one trails, number increases exponentially as it goes. 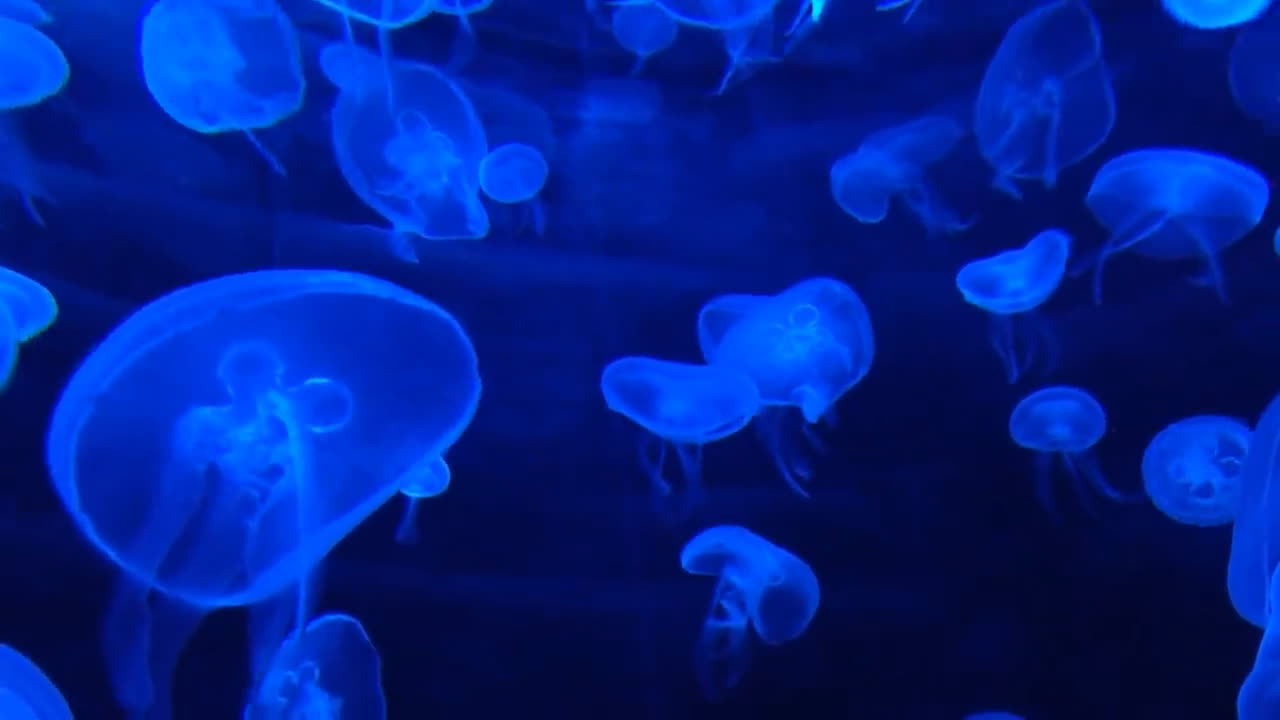 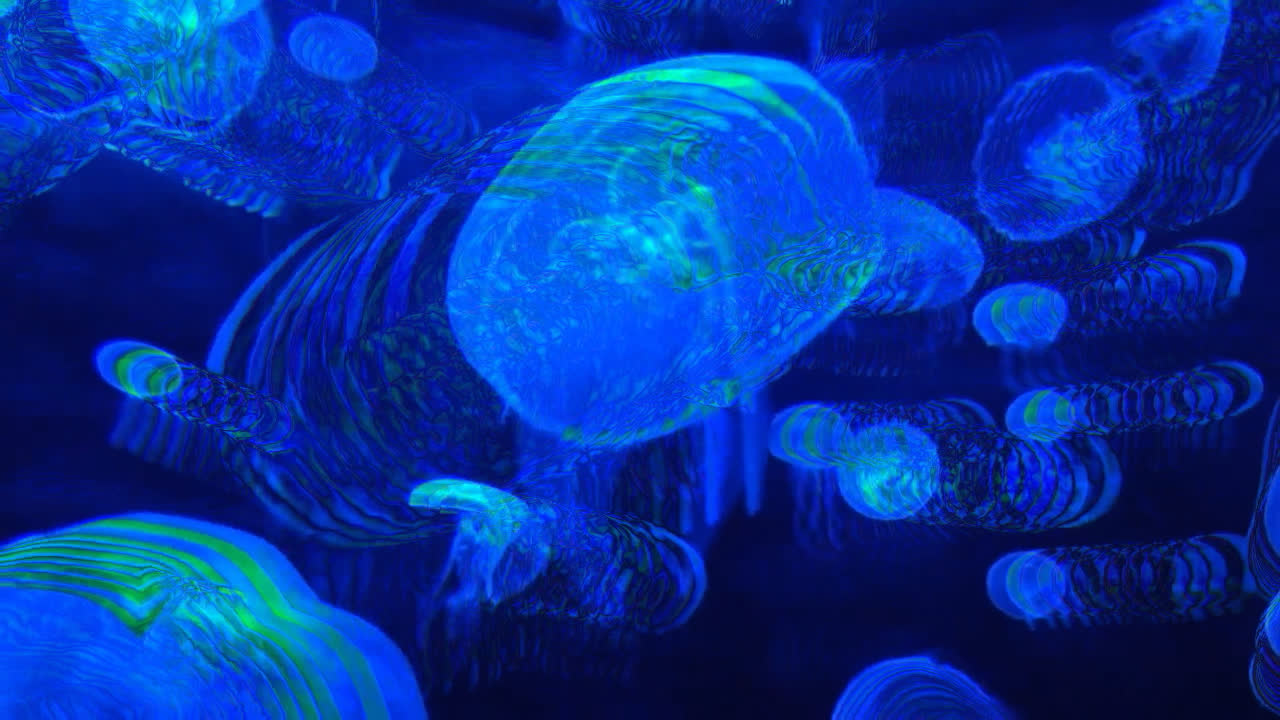 Turns a video file into a gif, using FFmpeg’s palettegen filter (good for sharing your art!). Note: this script has no preview mode, it just makes gifs.

Uses FFmpeg’s pseudocolor filter to create a “jetcolor” effect (also boosts the brightness and saturation of the video before the jet takes off).

Input 1: the video to be jetcolored

Input 1: the video file to be lagged

Input 3: the trail amount, or intensity of the effect. Default is 1.

One of the only Art School scripts to not require an input file, this one uses FFmpeg’s life filter to generate a visualization based upon John Conway’s Game of Life. Ideal for testing your FFmpeg installation and the starting point of FFmpeg Art School’s lesson plan. Note: if running this script in save mode, the resulting file will be located in your current working directory (in all likelihood bash_scripts or powershell_scripts)

Input 1: the video that will be keyed

A script that mimics a timebase corrector’s (TBC) processing amplification (procamp) controls, allowing for manipulation of the luma, black, chroma, or hue/phase of an input video. Modeled specifically on the DPS-290 TBC, each value has a range of -128 to 128, with 0 being the unchanged amount. Uses FFmpeg’s lutyuv and hue filters to make its manipulations.

Input 1: the video to be procamped 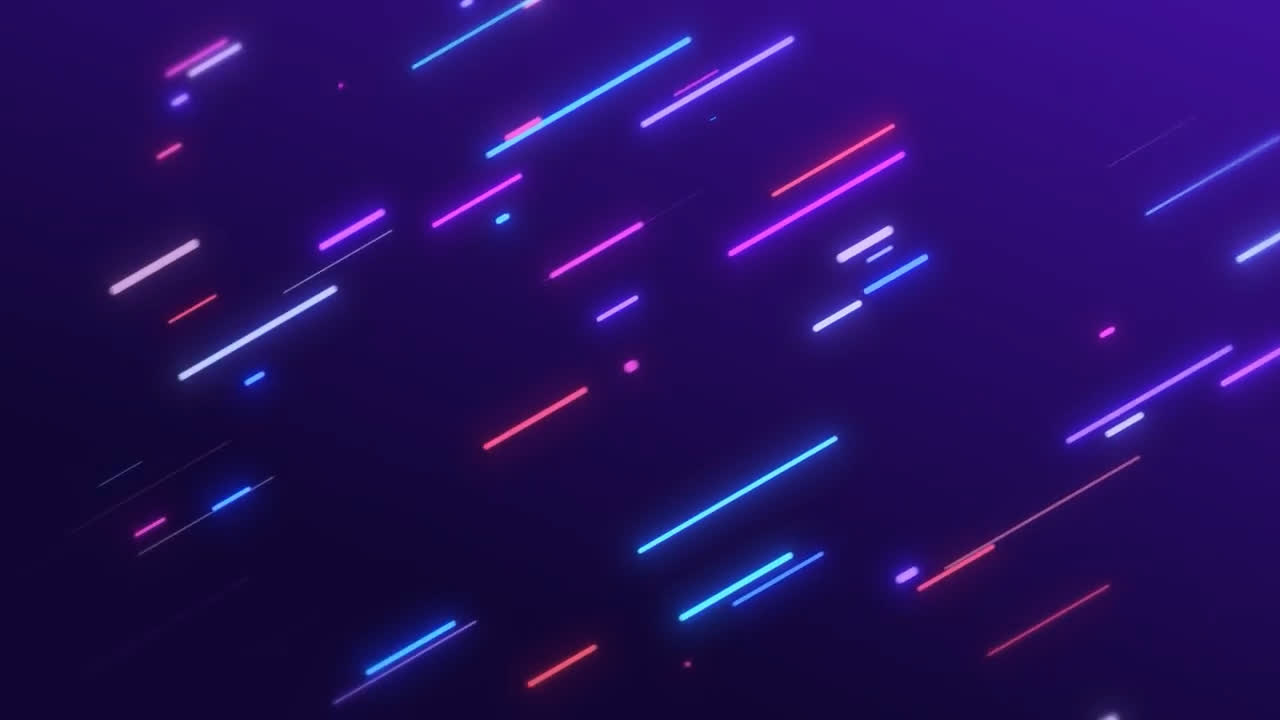 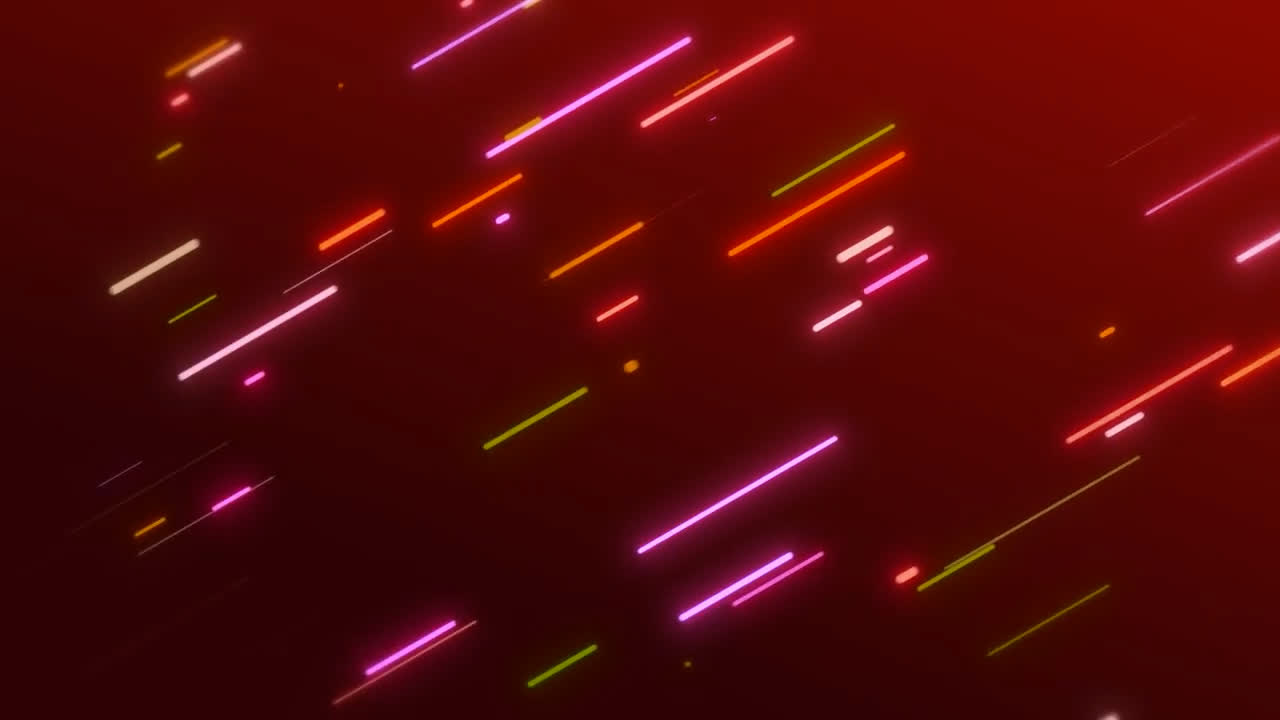 Conforms any input file into a prores file, with an option to resize. Not terribly exciting, but good for normalizing your files before making art.

Input 1: the video file to be transcoded to prores/mov

Boosts the video levels on an input file and adds a gradient effect to pixels that are out of broadcast range, using FFmpeg’s pseudocolor filter.

Input 1: the video file to be boosted and given gradient out-of-range colors 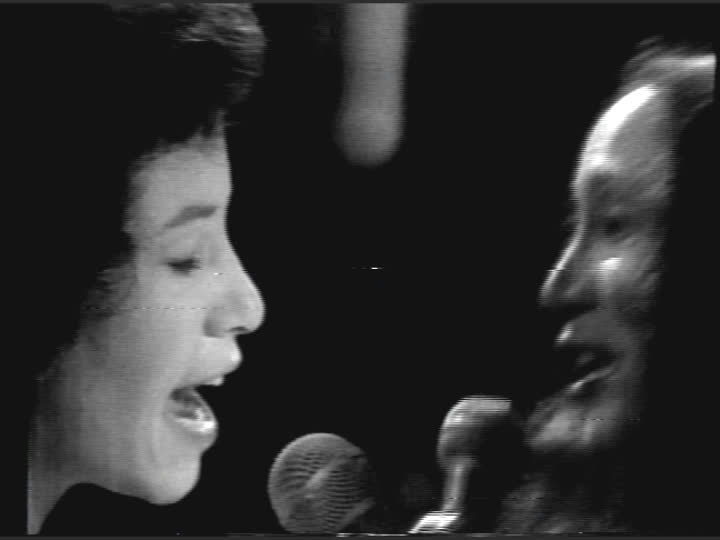 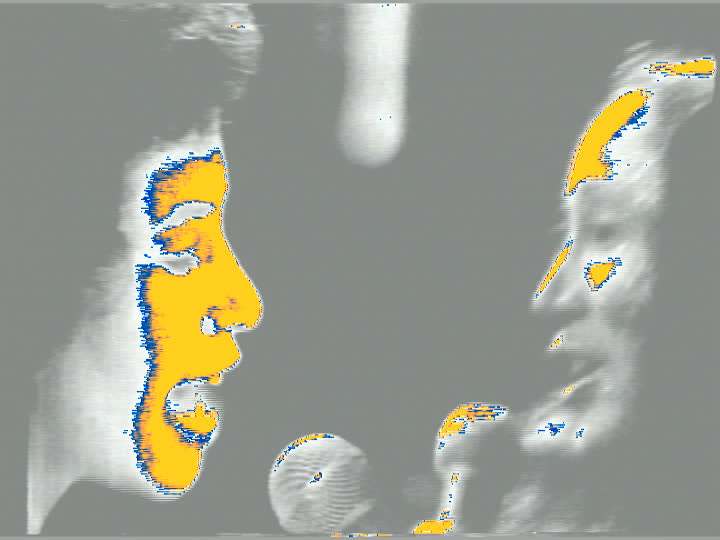 Adapted from oioiiooixiii and the amazing work described in this blog post, this script generates a rainbow trail effect that’s loosely based on the Scanimate video synthesizer system. A real doozy, uses FFmpeg’s colorkey, chromakey, and colorchannelmixer filters.

Input 1: the video to be rainbow trailed

Repeats the input file an arbitrary number of times. Makes a temporary concatenation list, uses FFmpeg’s concatenation demuxer to loop it up. NOTE: for this script, preview mode is disabled.

Input 1: the video file to be repeated

Input 2 (optional): the number of times to repeat the file. Default 2.

I Know What You Did Last Summer, the “What are you waiting for” moment (looping gif, but also a looping video! Believe it!)

Input 1: the video file to be reversed

Input 1: the video file to be rotated

Input 3: the stretch, to conform an output file to the input’s aspect ratio (1 for true 0 for false) 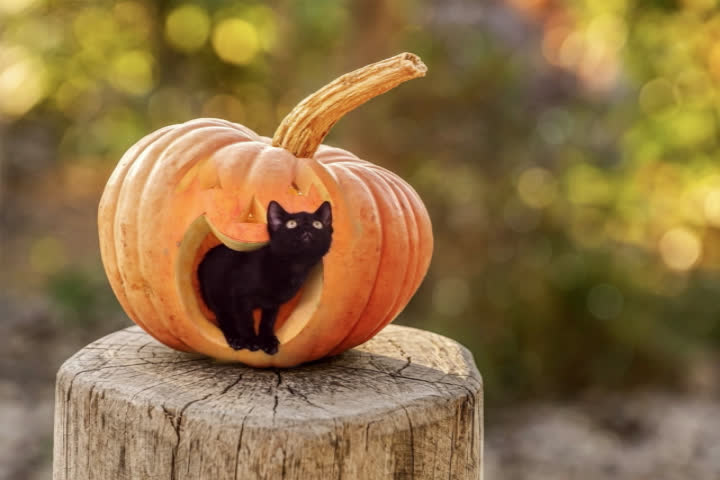 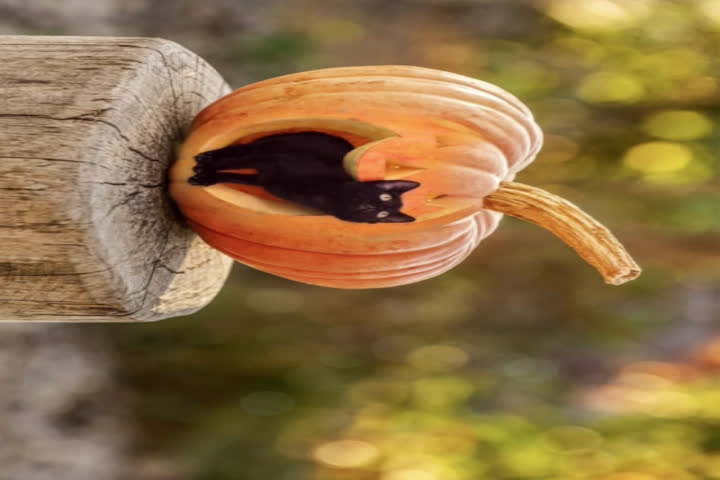 Performs a glitchy tblend on an input video file, again adapted from oioiiooixiii

Input 1: the video file to be tblend glitched

Input 2: the blend mode (choose a number between 1 and 4)

Input 1: the video file to be tblended

Input 2: the blend mode. Options include:

Generates text on screen based upon user input, offering a variety of text colors, background colors, sizes, and scroll directions/speeds. Uses FFmpeg’s Libavfilter virtual input device and the drawtext filter to do its thing.

Note: this script does not draw text on top of a input file, but rather generates something akin to a title card. So no input file needed!

Input 1: the text to be written. Accepts either text in quotation marks or path to a text file. If text, no apostrophes. If text file. make sure it’s plain text.

Input 5: the direction of the scroll (left, right, up, down, center). Default: center (no motion)

Input 6: the speed of the scroll (higher = faster)

Adapted from the QCTools filmstrip filter. Uses the FFmpeg tile filter to create a mosaic, “tiled” effect for the input video, based upon a user selected set of rows and columns.

Input 1: the video file to be tiled

Input 4 (optional): the output frame size. This will squeeze the output into a specific size. Must be in format “WIDTHxHEIGHT” to work

Trims a video file based upon user-defined starting and ending timestamps (HH:MM:SS). Uses FFmpeg’s output seeking to make its cuts. NOTE: for this script, preview mode is disabled.

Input 1: the video to be trimmed

Creates a mosaic of multiple input video files using FFmpeg’s xstack filter. Note: though the xstack filter itself is endlessly customizable, this script will only accept a set number of input files that can be stacked into a square shape (4, 9, 16, or 25).

Input 1: the video file to be situated in the upper left corner

The following inputs will vary based upon the total number to be stacked (4, 9, 16, or 25), but inputs should be sequenced from left to right, from row to row, as desired.

A play on one of the visualizations provided by the Line 21 closed caption extraction tool sccyou, zoom/flip/scroller takes a single line of video, zooms in extra close, flips it on its axis, and scrolls up vertically. Designed to visualize and analyze closed captioning information, which lives at the tippy top of the video raster, this re-purposing—which draws upon FFmpeg’s crop, scale, and tile filters—generates results unlike any other. And, as with bitplane, zoomflipscroller defaults to a randomly selected line (between 1-350) but will also accept a user-specified input.

Input 1: the video file to be zoomed/flipped/scrolled 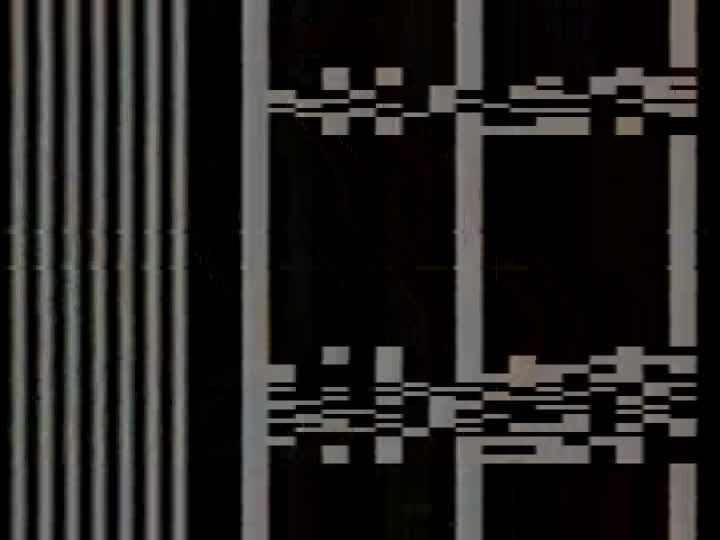 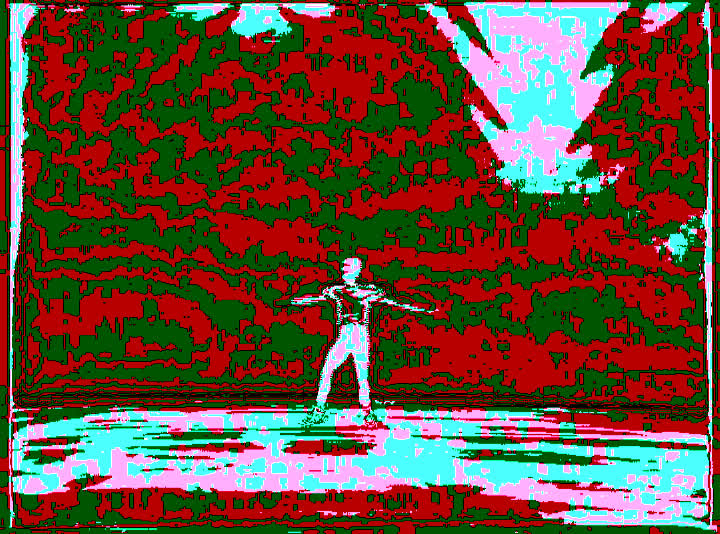 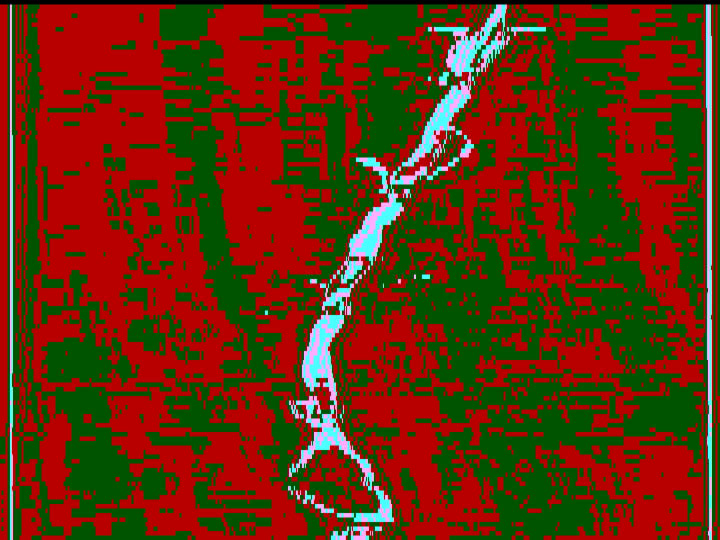